Get Started with Guild AI

Alternatively, to install to the user install directory, run:

When Guild is installed, check the environment:

For help troubleshooting, see Get Help with Guid AI.

Guild’s primary interface is the command line. Commands are run using the format guild COMMAND. Use the --help option to show information for a command.

Open a new terminal to enable completion. You can test completion by typing guild followed by a space and then press Tab twice. This shows a list of available commands. If you type a partial command, Guild automatically complets the command if it can. Otherwise it shows commands that match your input.

In the steps below, you create a sample training script and run it to generate experiments.

Note You can name this directory anything you want. The examples that follow use guild-start to denote the project directory for this guide.

Change to the project directory:

In the project directory, create a file named train.py that contains this Python code:

This script simulates a loss function. It accepts hyperparameters x and noise and prints the resulting loss.

Use Guild to run train.py:

Press Enter to start the operation.

When Guild runs a script, it generates a new experiment, or run. Each run tracks experiment details including results.

Highlight Guild lets you track experiments without changing your scripts. This saves time and keeps your source independent of an experiment tracking system.

These are the steps that Guild performs when it runs a script:

Important Guild runs all scripts from the run directory, which is empty by default. If your script attempts to reads files located in your project directory, it won’t find them. You must use a Guild File to tell Guild which files your script needs. These are defined as dependencies. For more information, see Dependencies.

Guild starts the application, and opens a tab in your browser. Guild View runs in the background in the command terminal.

Use Guild View to browse runs, view run details including metadata, files, and log output. You can compare run results and run artifacts in TensorBoard. 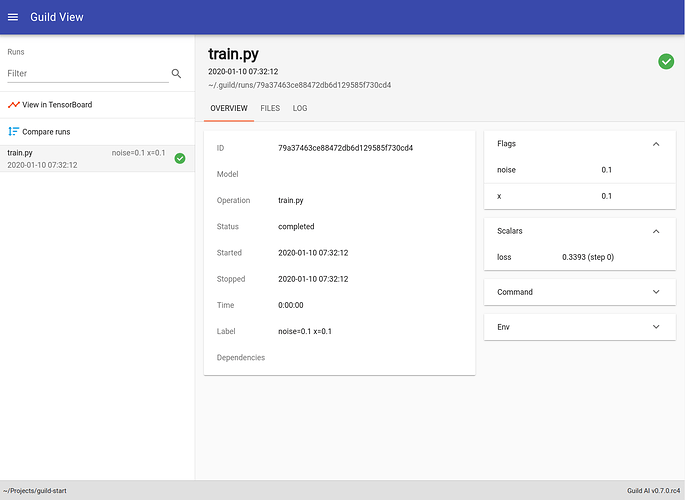 Return to the command terminal and press Ctrl-C to stop Guild View.

View Results from the Terminal

When working in a command line environment, it’s convenient to use the terminal to view run results.

From your terminal, use guild runs to list the current runs:

Information about each run is saved in a run directory, including metadata, flag inputs, and results.

Use guild runs info to show information about a run:

By default, Guild shows information for the latest run.

Highlight Guild captures detailed information for each run so you have a complete record of each result. This information is useful for making informed decisions and tracking changes to your model.

To list source code, include the --sourcecode option with guild ls:

Highlight Guild snapshots the source code at the time the operation is run so you have an accurate record of what executed. You don’t have to commit your code to a repository before starting a run. You can freely modify your project source while operations are running.

Use the --sourcecode option with guild cat to view source code associated with a run :

You can also open source code files in your system editor with guild open:

Guild opens the copy train.py used for the run with the default system program for py files. 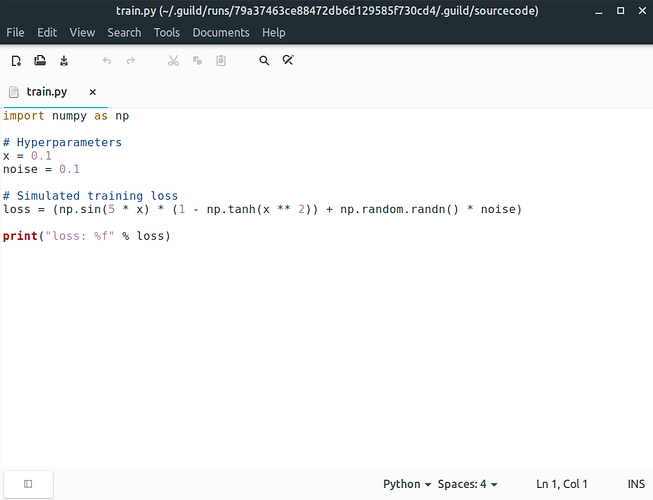 View a run file in a system program with guild open

In this section, you use Guild AI to capture experiments for a sample training script.

In the next section, you use Guild’s built-in hyperparameter tuning support to find values for x that minimize loss for the sample training script.

Next: Optimize a Model